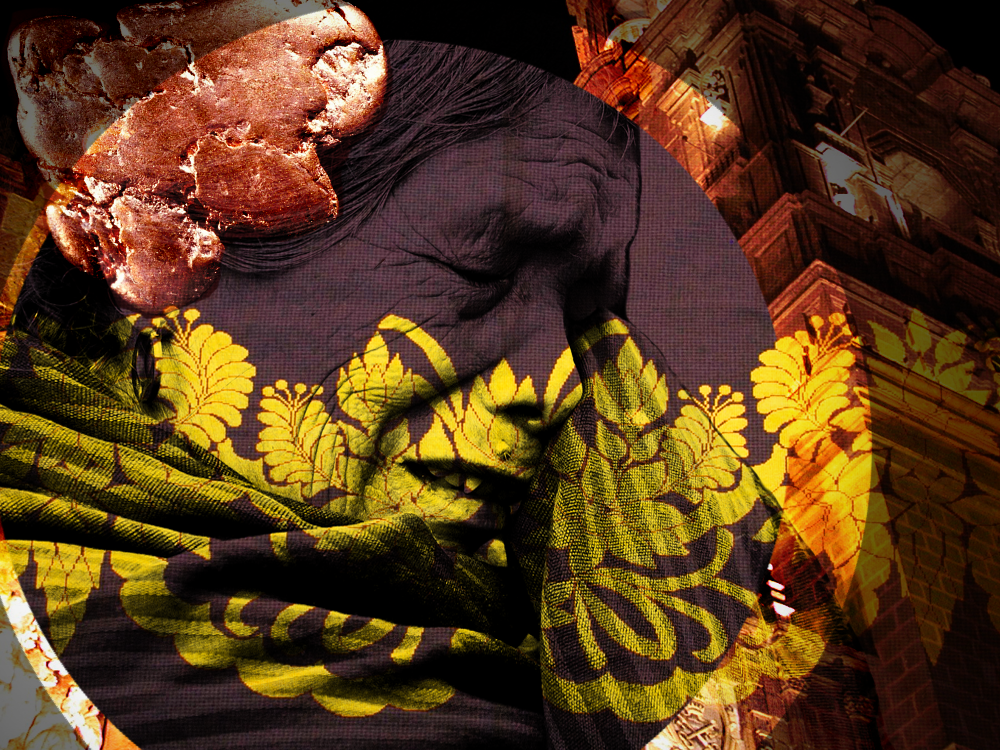 The Purepecha princess Erendira is said to have stolen a Spanish Calvary horse in the early 16th century, learned how to ride it and then taught her fellow warriors to do the same before leading the ensuing war on the Spanish invaders.  Eventually a peace treaty with the Purepecha was drafted in which they retained a shadow of autonomy. The treaty was subsequently  betrayed by Nuno de Guzman, a political opponent of Hernan Cortes.

Sent by the Spanish crown, his mission was to counter the inflating power of Cortes following the organization and unification of vengeful neighbors which resulted in Spanish occupation of Tenochtitlan, the Aztec capital city.  Seeking a victory with which to placate his benefactors Guzman followed a trail of golden peace offerings west to a land ruled by the Purepecha, a copper blade wielding people the Aztecs had failed to dominate. As a  result of clandestine negotiations with a wealthy nobleman Guzman was able to condemn, torture and finally murder Tzimtzincha-Tangaxuan II, the last Purepecha Cazonci (monarch) and take control of Michoacan, thus adding substantial territory to Spanish conquest and igniting an era of extreme violence for the Purepecha.

Nearly five hundred years later and the Michoacan soil remains wet with the spilt blood of its people.  On the Michoacan side of the border with Jalisco the small town of Tepalcatepec  has passed between the grisly cartel fists of Los Zetas, to the gun powered fingers of La Familia cartel to those of Los Caballero Templares. For a time the violence affected only those involved in the expanding drug trade as it made its way north to quench demand from the United States.  But as the trafficking moved out of the area cartel members began looking for ways to extort money from the local people. Living conditions in the area got so impossible and the government did so little to help stop the attacks that the community decided to rise up on its own.

José Manuel Mireles Valverde a member of  Concejo Ciudadano de Autodefensa de Tepalcatepec (The Citizens Advisory of Self Defence) explained the breaking point; “…empezaron a meterse con la familia. Empezaron a violar niñas de 11 y 12 años.” (“…they began damaging the family.  They began raping little girls of 11 or 12 years old.”) Fourteen such incidents were reported around the city in one month and then cartel members began taking the girls from their homes. Valverde goes on to explain that Tepalcatepec had been inspired by the neighboring  Purepecha, the only group which had successfully reclaimed their community from cartel control – and they had done it alone, without any military training or assistance from the Mexican government.

Tepalcatepec citizens began meeting at night and organizing a system of radio generated alerts which allowed them to gather sufficient numbers (at times several hundreds) of community members together in specific locations, confronting and preventing cartel aggression before it was able to manifest.  They set up a Facebook account where information about cartel movements in the area can be described and where photos can be posted and cartel members identified.  Their success, stemming from Purepecha bravery has been an inspiration to the entire region and citizens are beginning to feel empowered to liberate their own communities as well.

I arrived in Morelia, Michoacan with a request from my father on my mind.  Casa de Las Artesanias is advertised as a kind of financial refuge for the traditional artisans of the Michoacan area.Cool, perfectly white plastered walls and the manicured clay tiling the floor lent more to an atmosphere of high-end gallery than it did to that of an ex-convent.  Completely appropriate, in fact long over due, for artists producing such high quality pieces.  But after noting the prices listed on clearly typed out tidy labels in a country where bargaining is considered its own art form,  and where artisans usually sell their own work, I had my doubts about what percentage of the – mainly tourist – profits were filtering through the elaborate tableau and into the workshops of the artists themselves.

Further exploring the area my doubts were all but confirmed.  Upstairs was a maze of tiny workshops and stalls selling artesanias (folk art) of all kinds, without tidy white labels.  Sadly though the workshops seemed mostly for show as the savvy vendors figured out long before I walked the passageways,  a tourist loves a good show. They are even happier to part with their pesos if the show is conveniently located, cheap and easy to photograph in order to show off it’s undeniable ‘authenticity’ once they return home.  The problem with this scenario is that is deepens the schism between the art made for show and the art made for tradition, enabling all kinds of entrepreneurial vultures to take advantage of the situation on both sides.

Empty handed, I returned to the main plaza just as it was getting dark.  Morelia has a large cathedral which is illuminated in the evenings and just as is the case in most Mexican cities, a large plaza opens out in front it filling with music, food, families and travelers.  As a member of the latter category and alone I perched on the stone ledge of a raised garden to watch the crowds.  As the families dissipated and the music got louder, the plaza changed it’s tone and even though illegal to do so, beer cans were opened and passed around as the young locals and tourists alike took over, forever it seems on a quest to find their perfect fit within the crowd.

As I walked away from the pulsating singles mob ironically gyrating on the steps of the Spanish cathedral, I passed a small rust-encrusted pick up truck, the bed sagging under the weight of eight or nine women in uniform.  They wore neon green vests over their clothing and each one of them held equipment; a broom, a plastic trash bin, a dustpan. They were dark-skinned by Mexican standards, which can sometimes mean they had closer genetic ties to the indigenous population in the area.  They were waiting for as long as it took  for the party to end so that they could work cleaning up the plaza afterwards.

I thought about the Purepecha and how much their society must have changed since Guzman and his soldiers marched into it demanding gold and subservience and of many years later the cartels would turn their world into the same breed of nightmare.  I watched the women secretly a block away from the corner and thought about their potentially long journey home in the dark after the last of the beer cans had dropped from the last hand of the last tourists and they were able to sweep the plaza clean so the sun would rise once again on a perfect Spanish god.